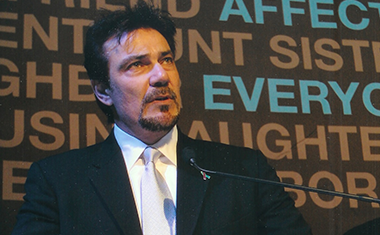 So, why IS a movie bad guy taking a stand as a good guy in real life?  What inspired film star Victor Rivas Rivers to become an activist and spokesperson against domestic violence, child abuse, and on behalf of advocates working to end violence against women and children?

The reason, he says, is a mother he knows who collapsed on the street as the result of years of battering and was taken to the hospital as a Jane Doe not expected to live.  Her children believed that her disappearance meant that their father had killed her.  Though she survived, returning to their household, the domestic violence worsened.  Victor also speaks because of a boy he knows who visited his local police department to report abuse inflicted upon a child—himself--and upon his mother, siblings, and pets. Though the officers were horrified, they could do little to stop the father responsible. The torture perpetuated behind closed doors, they said, was "a private family matter."  That boy was Victor himself and the woman who collapsed on the street was his mother. 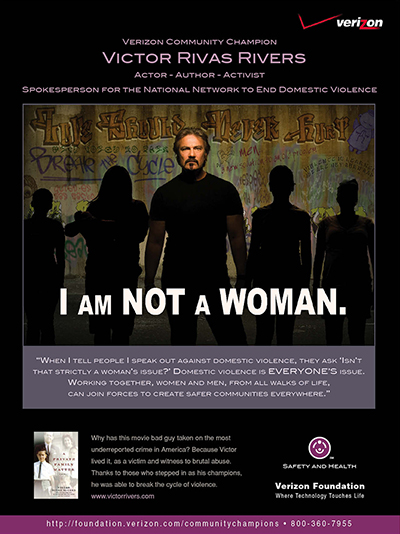 As a survivor who was able to break the cycle of violence, Rivers chose to break his silence about new ways to confront different forms of abuse—what he views as society’s most prevalent yet most curable social disease. Though much has improved over the years, domestic violence remains the most under-reported crime in America, what is often called “the Quiet Crime.”   Since 1999 he has served as a national spokesperson for the National Network to End Domestic Violence and he is also a community champion for the Verizon Foundation, committed to a cause of engaging more men in the movement.  In 2006, Victor was named by Women's E News as one of the 21 Leaders for the 21st Century - the second man so named by the organization.

As a leading activist in the cause of violence prevention, Victor travels regularly to Washington to speak with members of Congress.  He has met with governors and the President of the United States.  Rivers has spoken extensively at international conferences, to school assemblies, at organizational meetings, fund-raisers, and in the media, telling his story from his heart.  Rivas Rivers’ bestselling, acclaimed memoir, A PRIVATE FAMILY MATTER (Atria Books) has been translated into Spanish (ASUNTO DE FAMILIA), has been read by numerous book clubs, community groups, is being used by therapists, and is in shelters across the country, as well as in high school classes, recommended summer reading lists, and in college curricula.

A masterful storyteller whose topics are as diverse as his background, Victor Rivas Rivers is deeply passionate about ways that every citizen can make a difference in creating a safer, more peaceful and just world.  Issues he has addressed include such areas as community health, new strategies of ending and preventing different forms of abuse, the transformational power of education, arts, and literacy, philanthropy for social change, confronting bullying, diversity, and Hispanic heritage.  Rivers is committed to combating stereotypes and cultural prejudice.  A compelling, inspiring speaker whose hope, humor, and honesty shine through every presentation, he dedicates his journey as an unforgettable public speaker to the angels and advocates who made the difference in his life.