In A PRIVATE FAMILY MATTER, author Victor Rivas Rivers chronicles his escape from the War Zone of family violence in which abuse took place on the level of torture. Thanks to the power of intervention from others, his path became a journey of transformation—from dangerous youth considered beyond help to successful athlete, actor, activist, father and husband. An unforgettable story of a life reclaimed, his memoir is a testament to the village that literally raised a child, and to our human capacity to triumph over cruelty.

ABOUT A PRIVATE FAMILY MATTER

“This is a story about how I was saved by love at a time when most people considered me beyond rescue,” begins Victor Rivas Rivers in this powerful chronicle of how he escaped the war zone of family violence -– too often regarded as a “private family matter” -– and went on to become a good man, a film star, and prominent activist.

The Cuban-born author starts by recalling when he was kidnapped, along with three of his siblings, by his own father, who abandoned his pregnant wife before taking the children on a cross-country hell-ride that nearly ended in a fatal collision. This journey of survival portrays with riveting detail how, instead of becoming a madman like his father, Victor was saved by a band of mortal angels. Miraculously, seven families stepped forward, along with teachers and coaches, to empower him on his road from gang member to class president, through harrowing and hilarious football adventures at Florida State and with the Miami Dolphins, to overcoming the Hollywood odds, and to becoming a champion for all those impacted by domestic violence.

Though at times Victor’s odyssey is heartbreaking and disturbing, A Private Family Matter is ultimately a triumphant testament to humanity, courage 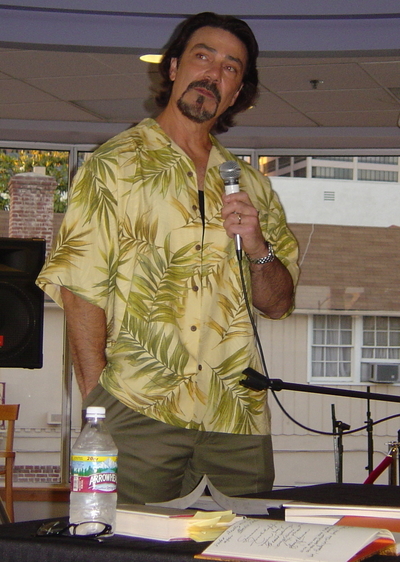 WHAT PEOPLE ARE SAYING

"A story filled with integrity, courage, and humanity -- all the things that exemplify Mr. Rivers. The journey makes the man."
~ Andy Garcia, actor

"I know the terror, dread, bruises, inescapability, and madness of [Victor Rivas Rivers's] violent childhood. It was my childhood. Now, I know Victor... brave, honest, brilliant and good. This book... urges every one of us to break the deadening and debilitating silence by telling our stories."
~ Eve Ensler, author and activist

"Read his book...I am very proud of him, as I know all of his former coaches and teammates are."
~ Bobby Bowden, Head Coach FSU Football program

"Grippingly powerful and moving. This true story of how a child was raised by a village of some caring, courageous individuals inspires us all."
~ Melanie Griffith and Antonio Banderas, actors

PUBLISHER'S WEEKLY:  "Helped by a series of "angels" -- a schoolmate's lawyer father, supportive teachers and coaches, a family that informally adopted him, and his own brothers -- Rivers overcame his rage and self-loathing. He tells this inspiring story of emergence from isolation and despair into love and community with passion, optimism and tenderness."  Read the full review

BOOKLIST: "Rivers' hard-won successes in later life (including a short stint in professional football) as he struggled to overcome his vicious temper and fear of emotional commitment, both legacies from his father. His determination to speak out to help others who have endured similar trials caps an inspiring record of a life reclaimed."

GOODREADS: "A review of 300-400 words cannot possibly convey the poignancy of this story. It is well-written, with a sprinkling of enjoyable observations, such as an anecdote about acclimating to Miami in August, and the bug life “spawned by the moisture.” Victor Rivas Rivers also shares his survival lessons as he pushes through his tough assignment." Read full review by Lynn Tolson on GoodReads.